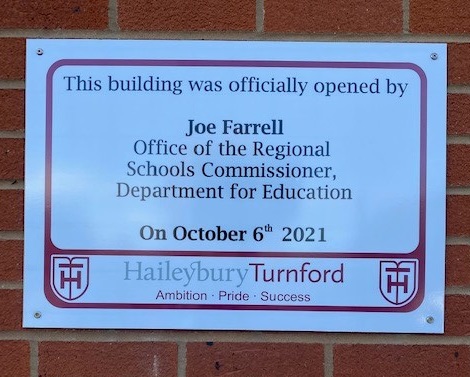 The new building was opened by Joe Farrell from the Office for the Regional Schools Commission at the Department for Education and was attended by The Mayor of Broxbourne, Cllr David Taylor, representatives from Haileybury, Haileybury Turnford governors, local councillors, contractor Morgan Sindall and students. After the opening, visitors were given a tour of the new facilities and the rest of the school..

Speeches were given by Mr Russell Matcham, Chair of Governors and Mr Robin Newman, Principal of Haileybury Turnford.

Robin Newman, Principal, said that “the opening of our new building is a symbolic moment for Haileybury Turnford, and provides a first class learning environment for our students. Our students have been having lessons in the building since the start of term, and they simply love it!”

Russell Matcham, Chair of Governors, added: “Haileybury Turnford continues to go from strength to strength, and the partnership with the academy sponsor, Haileybury, will continue to underpin the work of the school”.

All ArticlesLatest News from Haileybury Turnford

Congratulations to our Year 12 student, Samuel Featherstone who was awarded the 2020-21 Haileybury Partnershi ...