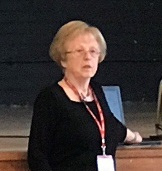 We were privileged to be able to welcome to our school, a Holocaust Survivor, Dr Agnes Kaposi. She was born in Hungary and started school at the outbreak of World War II.  Dr Kaposi explained about how this day is an occasion to remember the millions of people murdered during the Holocaust, under Nazi persecution and in the genocides which followed.

Holocaust Memorial Day on Monday 27th January is an international day to remember the six million Jews murdered during the Holocaust, alongside the millions of other people killed under Nazi Persecution and in subsequent genocides in Cambodia, Rwanda, Bosnia and Darfur. 27th January also marks the anniversary of the liberation of Auschwitz-Birkenau, the largest Nazi death camp.