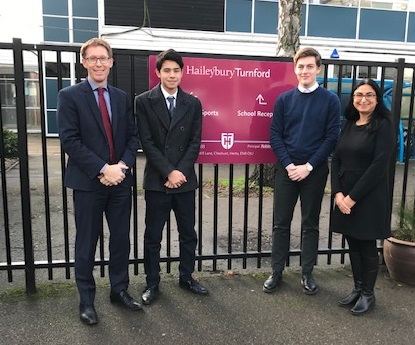 Congratulations to Liam Kline who has started at Homerton College, Cambridge reading English, and to John Pearce, studying Physics at Somerville College, Oxford. They, along with a number of other Sixth Form students received tailored support and guidance, including preparation for university entrance exams and interviews, from sponsor school, Haileybury in order to extend and develop them in pursuit of their chosen universities.

Principal, Robin Newman, said of the experience: “All students have been very positive about how they have developed as a result of the support they have received. They’ve all undoubtedly benefited a great deal from it, which is why the number of offers from Russell Group universities is at the highest level for many years. It’s been a terrific team effort, involving students and staff”.

This year’s places come on the back of last year’s success when Laura Lewis was successful in taking her place at the University of Cambridge to read Human, Social and Political Sciences.

The recent Ofsted inspection rated the sixth form at Haileybury Turnford as Good.