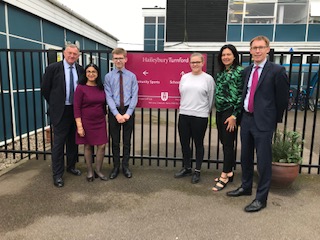 Two Haileybury Turnford students, James Evenden and Maisy Hurst, have been presented with awards that will see them travelling to Australia this summer on the trip of a lifetime.

James and Maisy have each won a Britain-Australia Society Education Trust (BASET) Pioneer Award.  It means they will travel to Australia for free to experience Australian life and culture for a month, including attending a school in Melbourne and being hosted by Australian students and their families.  With only two months to go until their trip begins, James and Maisy met with the Chairman of Trustees of BASET, John May, and trustee, Louise Mulley at Haileybury Turnford on Friday 3 May.  Trustee, Louise Mulley said: “Many congratulations to both James and Maisy on their awards.  This is a potentially life changing opportunity for both students, and BASET are excited to offer two Pioneer Awards following the first award to a Haileybury Turnford student last year.  We look forward to hearing about their trip and working together in the future with Haileybury Turnford to help other young people to experience Australian life and culture.”  James and Maisy, who are both in Year 12 said “Thank you to both BASET and Haileybury Turnford for this wonderful opportunity. We cannot wait to experience what Australia has to offer for us and our future.”

“We are thrilled that two Haileybury Turnford students will have this once-in-a-lifetime trip to Australia, fully funded by BASET,” said Haileybury Turnford Principal Robin Newman.  “There are two months to go until they travel, and we look forward to hearing all about their new experiences once they arrive in Australia.”

BASET is a charity which supports young people from both the UK and Australia, allowing them to learn skills and gain experience which can make a difference in their lives and help them develop their full potential. BASET is associated with the Britain-Australia Society, whose patron is the Duke of Edinburgh.