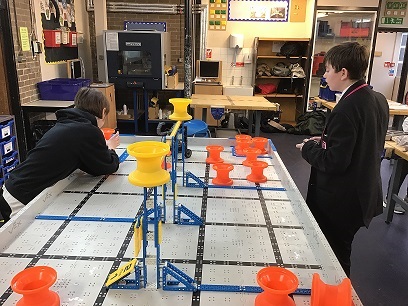 D&T launched their VEX robotics club last term, hoping to assemble a team who could compete in the National VEX Robotics competition.  It has been great to see the dedication of our founder Year 8 members and how they have been encouraging other students in the year to join.

There are now have 9 Year 8 students in the club and have formed three teams, hoping to enter next year’s Regional final.  Working together they have designed and built their own robots and have now started running practice competitions and challenges within the after school club in anticipation of the start of the next season’s events.